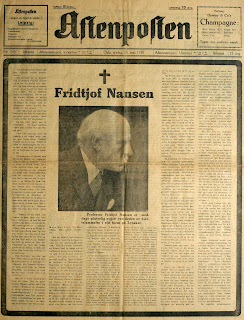 Aftenposten (Norwegian for "The Evening Post") is Norway's largest newspaper. It retook this position in 2010, taking it from the tabloid Verdens Gang which had been the largest newspaper for several decades. It is based in Oslo. Read more on Wikipedia

The Aftensposten operated a "Lysavis" - an electronic news-ticker during the October 1930 Norwegian Stortingsvalget to inform people of the results of the election. The Lysavis was located at the Oslo Østbanestasjon - Oslo's main station in 1930.  Lowry refers to the Aftensposten Lysavis in his first novel Ultramarine when he thinks of meeting Janet Travena; "Under the Aftenpostens Lysavis, standing in the Drammersveien with you." (Pg. 52).
Posted by Keeping Soul Alive at 17:31