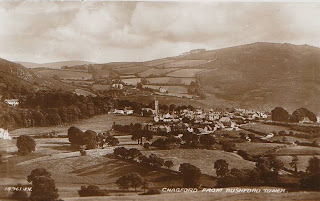 Chagford is a small town and civil parish on the north-east edge of Dartmoor, in Devon, England, close to the River Teign. It is located off the A382, about 4 miles (6 km) west of Moretonhampstead. The name Chagford is derived from the word chag, meaning gorse or broom, and the ford suffix indicates its importance as a crossing place on the River Teign.


Lowry stayed with his friend James Travers who owned a silver-fox farm near Chagford in early June 1933. On the 12th June, Lowry was admitted to Morteonhampstead Cottage Hospital suffering from "dysentry" contracted in Spain, though Clarissa Aiken reported that he had gone in for drying out. (Gordon Bowker Pursued By Furies Pg. 159). Lowry left the hospital after several days to recuperate at the Vernon Court Hotel in Torquay. 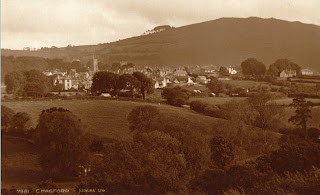 Lowry did return to Chagford from time to time during the summer of 1933 to visit James Travers. On one of these occasions he began an affair with a local woman called Peggy Power. Lowry also crashed his MG F-Type Magna into a rock near Chagford after getting drunk at the Three Crowns Hotel in the town.
Posted by Keeping Soul Alive at 09:36