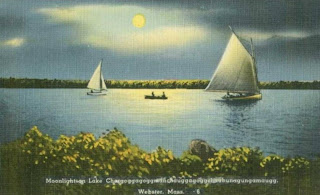 Lake Chargoggagoggmanchauggagoggchaubunagungamaugg, also known as Webster Lake, is a lake in the town of Webster, Massachusetts, United States. It is located near the Connecticut border and has a surface area of 1,442 acres.

The lake's name comes from Nipmuc, an Algonquian language, and is said to mean, "Fishing Place at the Boundaries -- Neutral Meeting Grounds". This is different from the humorous translation, "You fish on your side, I fish on my side, and nobody fish in the middle", thought to have been invented by the late Laurence J. Daly, editor of The Webster Times.Read more on Wikipedia

He refers to the lake in his first novel Ultramarine; "Say Chagogawogmanchogomogchawggohuatungamog. If you can say that you're not drunk." (Pg. 112). Lowry was probably drawn to the name as he often picked out strange/humorous place names that had resonance for him from his reading or travels. Lowry possibly knew this from his 1929 trip to the USA or he may have seen it in an atlas as a child or later. As ever with Lowry he mis-spelt the name.
Posted by Keeping Soul Alive at 21:56