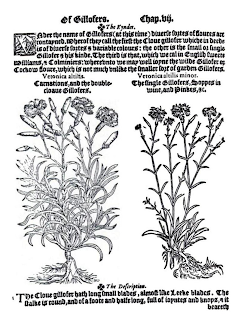 Lowry refers to the flower in Chapter 3 of Ultramarine during a long internal dialogue by Dana Hilliot as he muses on his drunken drift through the red light district of Dairen; "while through the attic window must be blown the scent of stock-gillyflower".

A popular name applied to various flowers, but principally to the clove, Dianthus Caryophyllus, of which the carnation is a cultivated variety, and to the stock, Matthiola incana, a well-known garden favourite .

The word is sometimes written gilliflower or gilloflower, and is reputedly a corruption of July-flower, " so called from the month they blow in." Henry Phillips (1775–1838), in his Flora historica, remarks that Turner (1568) " calls it gelouer, to which he adds the word stock, as we would say gelouers that grow on a stem or stock, to distinguish them from the clove-gelouers and the wall-gelouers . Gerard, who succeeded Turner, and after him Parkinson, calls it gilloflower, and thus it travelled from its original orthography until it was called July-flower by those who knew not whence it was derived." Dr Prior, in his useful volume on the Popular Names of British Plants, very distinctly shows the origin of the name . He remarks that it was " formerly spelt gyllofer and gilofre with the o long, from the French girojlee, Italian garofalo (M . Lat. gariofilum), corrupted from the Latin Caryophyllum, and referring to the spicy odour of the flower, which seems to have been used in flavouring wine and other liquors to replace the more costly clove of India.

The name was originally given in Italy to plants of the pink tribe, especially the carnation, but has in England been transferred of late years to several cruciferous plants." The gillyflower of Chaucer and Spenser and Shakespeare was, as in Italy, Dianthus Caryophyllus; that of later writers and of gardeners, Matthiola .


Much of the confusion in the names of plants has doubtless arisen from the vague use of the French terms giroflee, ceillet and violette, which were all applied to flowers of the pink tribe, but in England were subsequently extended and finally restricted to very different plants .

The use made of the flowers to impart a spicy flavour to ale and wine is alluded to by Chaucer, who writes: " And many a clove gilofre To put in ale " (Tale of Sir Thopas); also by Spenser, who refers to them by the name of sops in wine: "" With gellifiowres; " Bring coronations, and sops in wine, ..." (The Shepheard's Calendar), which was applied in consequence of their being steeped in the liquor. In both these cases, however, it is the clove-gillyflower which is intended, as it is also in the passage from Gerard, in which he states that the conserve made of the flowers with sugar " is exceeding cordiall, and wonderfully above measure doth comfort the heart, being eaten now and then.".

Spenser also refers to the flower in his poem Amoretti "Her lips did smell lyke unto Gillyflowers" and Shakespeare; "The fairest flowers o' the season/Are our carnations and streaked gillyflowers : Winter's Tale, iv. 2.

We must assume carnations were growing at the Lowry family garden hence the reference "while through the attic window " is to Lowry's study in Inglewood. He must have also been aware of the references made to the flower in Chaucer, Shakespeare and Spenser.
Posted by Keeping Soul Alive at 17:19