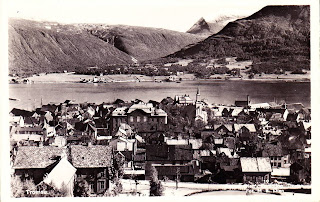 Tromsø is a city and municipality in Troms county, Norway. The administrative centre of the municipality is the city of Tromsø. By the end of the 19th century, Tromsø had become a major Arctic trade center from which many Arctic expeditions originated. Explorers like Roald Amundsen, Umberto Nobile and Fridtjof Nansen made use of the know-how in Tromsø on the conditions in the Arctic, and often recruited their crew in the city. The Northern lights observatory was founded in 1927. Read more on Wikipedia

There is no record of Lowry visiting Tromsø on his 1931 trip to Norway. Lowry refers to the city in his first novel Ultramarine;; the ship Oxenstjerna seen by Dana Hilliot and Janet Travena in Birkenhead Docks in Ultramarine is leaving for Tromsø; "seeing her again sailing out mildly for Tromsø on the last stage of her journey.."; the Oxenstjerna is registered in Tromsø; "Tromsø  we read on her receding stern." (Pg.63) and the city is mentioned again in Hilliot's drunken thoughts in Dairen in Chapter 3; "A week and we’ll be docked in Tromsø". (Pg.66 )
Posted by Keeping Soul Alive at 22:25