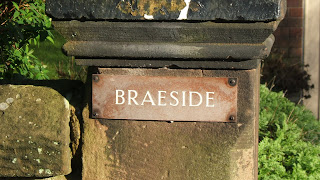 Lowry attended the Braeside Preparatory School between 1914 and 1916. The school used to be located in Kirby Park, West Kirby, which is under a mile from Lowry’s second home, Inglewood in Caldy. At the time, Kirby Park was the name of the southern area of West Kirby, with its own railway station on the West Kirby to Hooton line. Kirby Park today is one road in the south of West Kirby containing many large houses. At some point in the 1900s, or perhaps earlier, the road the school was in was renamed as Devonshire Road. 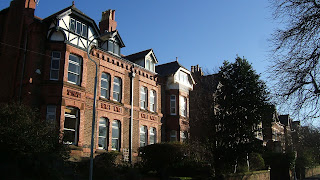 The school occupied two semi-detached Victorian houses numbered 17, 19, 21 and 23, with a playing field across the road, which still exists and is now a play area for local children. No. 19, whose house bears the nameplate ‘Braeside’ still has graffiti carved into woodwork on the stairs from the building’s time as a school, which closed before the Second World War.

The Rev. A.G. Cox (late scholar of Hertford College, Oxford and Assistant Master of Bromsgrove and Birkenhead Schools) receives boys from 7 to 15 years age to prepare them for the Public Schools.

Both at Bromsgrove (for 2.5 years) and at Birkenhead (for 9 years), Mr Cox acted in the capacity of House Master in the School House, and had special opportunities for becoming thoroughly acquainted with the internal management and discipline of a Boarding School.

The School Course includes instruction in Latin, Greek, French, Mathematics (German, Music, Singing and Drawing, if required), together with a general knowledge of the Bible. It is Mr Cox’s aim to maintain a high moral as well as intellectual standard. He feels that the development of character must necessarily be largely guided by the influences brought to bear upon a young boy at school, and he endeavours to pay as much attention to each individual out of school hours as well as the classroom. He hopes the boys entrusted to him will be prepared in every way for the wider life of the Public Schools.

Mr Cox has the assistance of Resident Masters for French and Mathematics, and of Music and Singing Teachers, and Drill Sergeant.

The domestic arrangements are in the hands of a Lady Matron, who does everything to secure the comfort and health of the boys.

A Prospectus of the School will be supplied on application to the Head Master.

The House stands in a very healthy position; there is a Carpenter’s Shop and an excellent Gymnasium attached to the School as well as a field for cricket and football, commanding a full view of the mountains and the sea.

Not only do we get a flavour of the school day for Malcolm but also perhaps an indication of why Arthur Lowry sent his sons Malcolm and Russell to the school: Mr Cox’s aim ‘to maintain a high moral as well as intellectual standard’ must have appealed to Arthur’s Wesleyan philosophy as much as the short distance his sons had to travel. The availability of a sports field and gymnasium must also have appealed to the health-conscious Arthur.
Posted by Keeping Soul Alive at 14:05