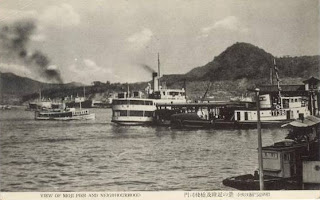 Moji-ku is a ward of Kitakyūshū, Fukuoka Prefecture, Japan. It is the former city of Moji which was one of five cities merged to create Kitakyūshū in 1963. It faces the city of Shimonoseki across the Kanmon Straits between Honshū and Kyūshū. 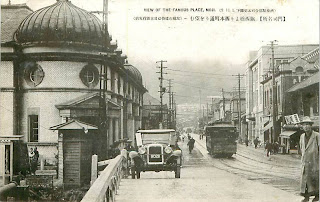 Moji was first made into a port by Suematsu Kenchō with the financial backing of Shibusawa Eiichi in 1889. It was chiefly used for the transportation of coal, though there is a traditional song about the sale of bananas imported into Moji from Southeast Asia which survives to this day (Banana no tataki-uri). Moji was also the departure point for many troops in the Russo-Japanese War who were ferried across to Korea. 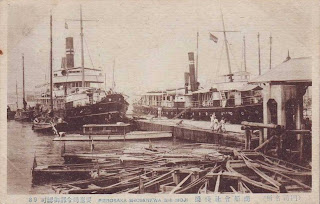 Lowry refers to the port in his novel Ultramarine when Norman is warning Dana about contracting venereal disease when he goes ashore in Tsjang Tsjang (Dairen); "Voyage before last, in Muji, it was, I picked up, the finest dose you ever saw, voyage before last in the Maharajah - she's lying in this port now" (Pg. 34) and again when the crew of Oedipus Tyrannus are talking about how Smithy contracted venereal disease in Moji; "got it in Muji he had, and never said damn all to anybody.." (Pg. 61). 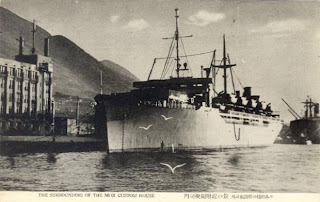 There is no record that Lowry visited the port on his 1927 voyage to the Far East. Lowry was familiar with J. Johnston Abraham's The Surgeon's Log, which features a visit to the port where his ship takes on coal (Pgs. 122-144), which may have inspired him to feature the port in Ultramarine. Or Lowry may have known that Moji was a regular port of call for Blue Funnel ships to take on coal on trips to Japan. 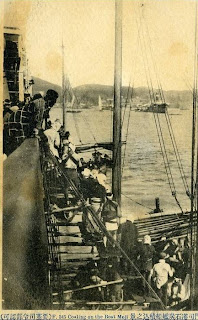 Posted by Keeping Soul Alive at 18:37