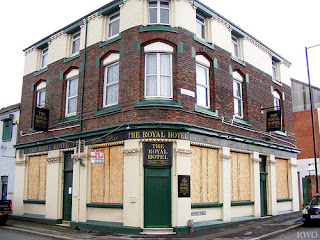 A former pub in Birkenhead which was re-named The Royal Hotel at a later unknown date, which has now been converted to a private house. Located on corner of Cathcart Street and Corporation Road. Address was 3 Cathcart Street. The pub was across the road from the entrance to the East Float Dock berth for Blue Funnel ships whose sailors frequented before and after sea voyages. Joe Passalique drinks in the pub ('Goya The Obscure' Pg.270). William George Rogers was the pub landlord in 1927. Lowry must have frequented the pub before or after his voyage to the Far East in 1927. “Drawing near the Birkenhead dockside the pubs came thick and fast, with sea-sounding names here: the Dolphin” in ‘Enter One In Sumptuous Armour’ (Psalms Pg. 233). 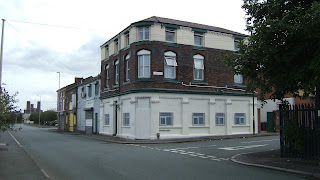 Posted by Keeping Soul Alive at 12:23

Email ThisBlogThis!Share to TwitterShare to FacebookShare to Pinterest
Labels: Bars, Birkenhead, Enter One In Sumptuous Armour, Goya The Obscure