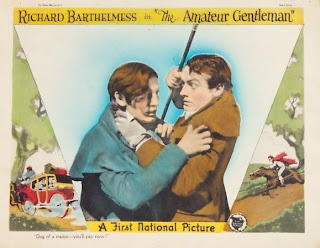 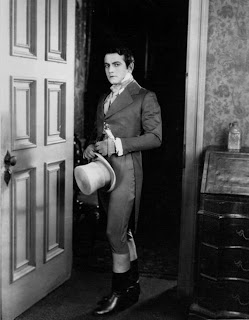 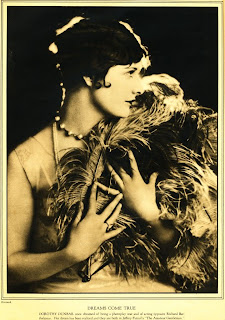 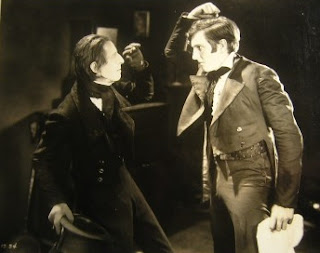 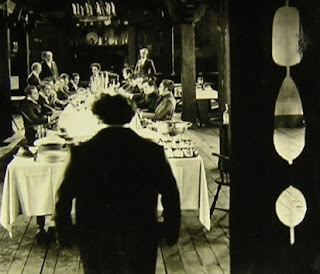 Lowry may have chosen to refer to the film for several reasons. Lowry probably knew the novel as Farnol was a writer who had read while at school (Bowker Pursused By Furies Pg.35). 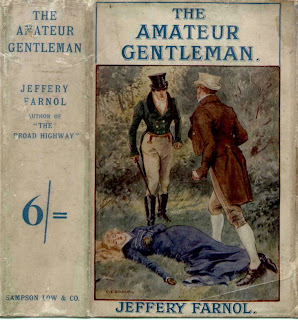 Barthelmess starred in one of Lowry's favourite films Broken Blossoms. Lowry may have noted the film in Dairen in the summer of 1927 though it was only on general release in England later that year when Lowry may have seen the film. The phrase "A smashing drama of the good old days of Merrie England!" seems close to the publicity material. 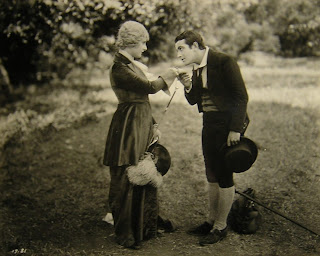 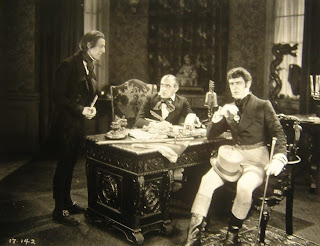 Colourful glimpses of old England are depicted in the film transcription of Jeffrey Farnol's novel, "The Amateur Gentleman," now at the Mark Strand. This photoplay takes one back to the days when heroines were haughty and villains were knights; when plots were hatched in picturesque wayside inns; when usury thrived and the hawk-eyed game keepers were kept on the alert by poachers; when men fought with bare fists and old sea captains bragged of their capacity for port wine and were proud of a hook for a hand.

Although this picture is not alive with suspense, it has its captivating moments, due to the frank and simple manner in which it has been produced and Richard Barthelmess's sympathetic portrayal of Barnabas Barty, the handsome son of an ex-pugilist and innkeeper, who, on inheriting a huge fortune, aspires to be a gentleman. After a discussion with his robust father, he is quite content that the best he can expect is to be an amateur gentleman. Sidney Ollcott, producer of the film conception of "Little Old New York," directed this subject, and it is obvious that this production might have been a better piece of work had some unnecessary details been skipped and more attention paid to the incidents through which Barty gains his polish. 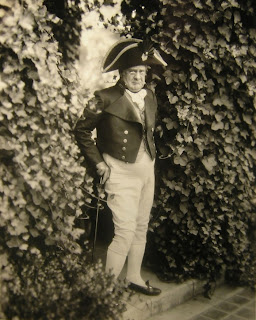 It is one of those pictures that has no little mirth in junctures intended to be anything but comical. For instance, Lady Cleone Meredith is thrown from her horse, and while she is still unconscious Barty and the persistent Sir Mortimer Carnaby hold a heated discussion which ends in a fight, in which Barty comes off the victor. The hero then turns his attention to Lady Cleone, who is slowly recovering from her fall. In a little shooting episode three men topple over simultaneously and are therefore seen in different postures of suffering. This scene, instead of giving the audience a shock, caused many persons to giggle and laugh.

In the early chapters Barty's main efforts to become a gentleman appear to be confined to learning from a book how to bow. Later he enlists the assistance of a poacher, who had been a valet to various noblemen, and this renegade menial not only teaches Barty how to act but what to wear. It was all in the days of George III, when the essential article of sartorial equipment was an embroidered waistcoat.

"Why is your eye in mourning?" the villain is asked by a friend, and it is later discovered that the redoubtable Barty is responsible for the villain's disfigured countenance. Barty can really ride a horse, and he triumphs in a steeplechase, much to Sir Mortimer's annoyance.

The scenery, although the picture was made in Hollywood, is quite effective, and the sets of the old houses and streets do their share to help the entertainment. Mr. Ollcott has also introduced a charming sequence in which the background is a garden party. In this episode an indulgent and loquacious duchess furnishes some amusement.

The film was actually showing at the Victoria Theatre, Singapore in mid-June 1927 during Lowry's visit aboard Pyrrhus on his voyage to the Far East. Therefore it is possible that Lowry saw the film in Singapore. Another possibility is that he saw the film in New Brighton in October 1927 on his return from the Far East when it was shown at the Trocadero when it followed by another film mentioned by Lowry - Mare Nostrum. 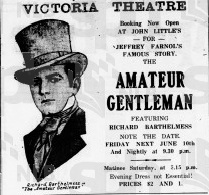 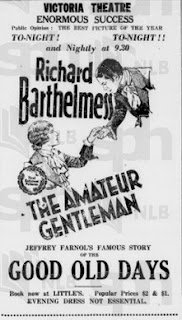 Posted by Keeping Soul Alive at 15:50